How and Why Not To Care About Terrorism

Terrorism is terrible. And that is the exactly its point. To spread terror in people's minds. However, it is not the most important threat. Car drivers and yourselves are bigger threats to your lives than terrorists. I am not saying we should stop mourning victims. But we should not get hysterical and demand drastic measures.

Take an example of France. Every year more than 3 000 people die in traffic-related accidents. And that is good news because the numbers are dropping fast (in the early 1970s it was 18 000). Every year about 10 000 people die by suicide in France. It is 28 people every day. So how many people in France died by the hands of terrorists in the last 20 years? When exculding the last night's attacks, it is 46.

It means that every two days more people commit suicide than died between 1995 and October 2015 in terrorist attacks in France. And you cannot just say, that those people wanted to die so it does not really count. Sure, we cannot save all of them, but such high numbers are a result of ineffective and underfunded mental health system. Those people needed our help, but we were not able to provide it. This is not true only for France but for all Western countries including Czech Republic and especially Lithuania.

When you look at the data, you can see that terrorists are not a real threat to the public at large. You may disagree with me, but is it any better to lose a member of your family or a close friend in a car accident than in terrorist attack? No. It is always devastating and I am not able to find any kind of solace in the fact, that the person who killed them did not want to do it. They are just gone and that is what matters.

We are not so smart

Actually, we are stupid. We all suffer from availability heuristic, the tendency to assume that information which is easy to recall is more important that the one which is not so easy to recall. And it is much more easier to recall that thousands died in 9/11 attacks that the thousands who died on the roads or depressed and alone in their empty apartments. I also suspect that for some reason we consider intentional threats more dangerous than unintentional even though the statistics say otherwise, even when controlling for availability.

Our mental shortcuts make us do bad decisions. We are willing to sacrifice a lot in the name of mitigation of the terrorist threat. Not just our money but also our liberties and privacy. We are not willing to invest so much in the name of road safety and mental health. In a quite narrow sense, our governments would probably do a service to a public safety by sending money from "hard security" resorts (Interior and Defense ministries) to "soft security" resorts (Health and Transportation ministries). 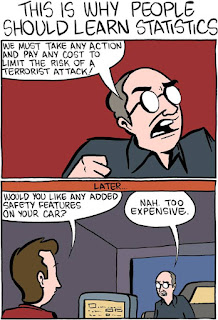 However there is one big problem with this narrow approach. Terrorism is not just a direct threat to human lives, but to the whole idea of liberal democracy. Terrorist are not the immediate enemies here. Populist domestic politicians can take advantage of these crises and establish illiberal regime hiding their true intentions behind security concerns. Both jihadists and xenophobic populist political leaders benefit from terrorist attacks. In the real world with fearful and irrational voters, maybe we need to sacrifice something in order not to lose it all. Only in a rational world, we could consider terrorist attacks as mere everyday facts of our lives, the same way we consider traffic accidents and suicides of people we do not know.

Defeat the terrorism, not terrorists

The strategy and motivations of terrorist attacks is more complicated, than most of you probably think. It is not really about killing people. It is not just about the hate they feel towards civilians. The essence of terrorism is not killing, but the fear itself. They want to intimidate masses. The want to spread distrust between Muslim population and the rest of society. They would welcome repression of Muslim communities by the Western governments and xenophobic thugs, because it brings them more recruits.

Many people call for military defeat of Islamic State as a proper reaction to these attacks. They want to defeat terrorist. Even though that might be a good idea, this is not really the way you can defeat terrorism. This way you can disrupt part of the infrastructure terrorists used for yesterday's attacks, however terrorism was here before IS and it will be here after IS. It could help reduce the risk of another successful attack, but I do not believe that the difference would be huge. We should also keep in mind, that Western boots on the ground in Syria and unavoidable "collateral damage" could actually increase the likelihood of radicalization of domestic Muslim populations and increase the risk of further terrorist attacks.

The only thing which makes terrorism work is the importance we attribute to it. Without the extraordinary attention we are giving to terrorism now, it would be a useless strategy. Terrorists love the attention because it helps them spread their message, get new supporters and ultimately get more money from wealthy donors. If our societies were able to accept terrorism as a "new normal", it would became obsolete. We should accept that we cannot save all the people like in many other cases. We will never achieve this goal, but caring a little less about terrorism should not be a step in the wrong direction.